One of the most important concepts of Buddhism is the idea of liberation, on the basis of which Buddhist ethical thought was built. Vietnamese monks defined the concept of liberation in their works and strove to put it into practice during a long historical time. Along with taking the "Noble Eightfold Path" of Mahayana Buddhism as the basis, the unique feature of the idea of liberation of Vietnamese Buddhism is that it is simultaneously influenced by both Chinese Buddhism and the ideas of Confucianism and Taoism. 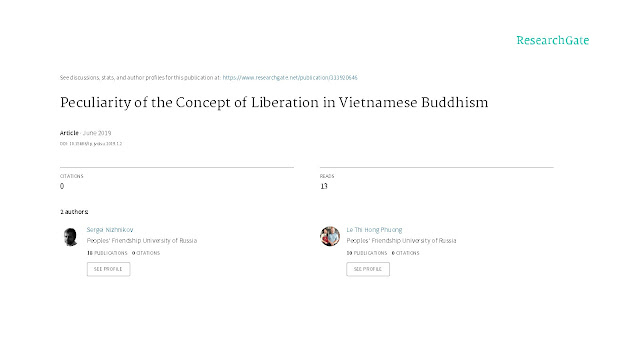 The authors analyze the concept of liberation in Vietnamese Buddhism by three main ideas: liberation as a revelation of the Buddha in self-awareness; liberation as self-reflection; release, requiring a positive incarnation in life. Peculiarity of the liberation concept in Vietnamese Buddhism is the spirit of "unconcern" (absence of the fear before samsara), unconditional (independence from writings, dogmas, words), embodiments (harmony with life, making people free from sufferings caused by war and acts of nature), "turn inside" (looking into the heart in searches of liberation) and "a direction outside" (liberation of the people, the country). The Vietnamese Zen-Buddhism asserts, that the way of liberation is an experience of acceptance by each person of absolute truth in the consciousness. The purpose of liberation is the nirvana surpassing all dualistic contradictions. 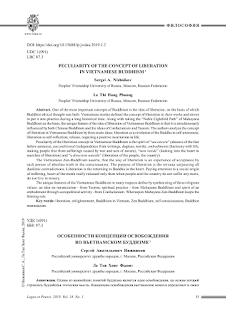 Liberation is the returning to Buddha in the heart. Paying attention to a social origin of suffering, heart of the monk really released only then when people and the country do not suffer any more, do not live in misery. The unique features of the Vietnamese Buddhism in many respects define by synthesizing of three religions values: an idea on renunciation - from Taoism, spiritual practice - from Mahayana Buddhism and spirit of an embodiment through sociopolitical activity - from Confucianism. Whereupon Mahayana Zen-Buddhism keeps the forming role.